Yesterday was Valentine’s Day. Like most holidays, in my opinion, it’s highly commercialized. Perhaps unintentionally, the message received by most singles is, “I am not enough”.

That’s not a thought I entertain in the everyday, so it wasn’t part of Valentine’s Day. I bought my daughters new shirts as I usually do. 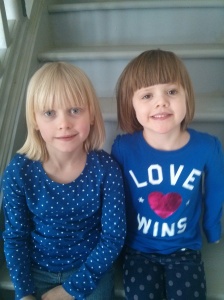 The message on Athena’s top is dear to my heart. Love Wins! In so many ways that is the testimony of our family. We invited another single mom over for lunch. She asked to bring a friend – a single mom as well. My girls and I turned the lunch into a little party. I ordered cupcakes from a lady at church. I bought flowers. We decorated.

In years gone by, I’ve busied myself with lavishing love on others. Many times I made greeting cards and wrote heartfelt words to dear friends who were without significant others on Valentine’s Day. That made me feel better about being alone.

This year much too late, I remembered not everyone is comfortable being on their own – especially at Valentine’s. But I was out of time to do anything about that.

3 cupcakes with 3 hearts for our little family of 3

Since becoming a mom, that longing has slowly subsided. Someone would be lovely. But I’m not going to spend my time waiting. I have a life to life – a life of significance. That significance is not marked by having a ring on my finger or someone to fall asleep with.

This year, when I least expected it, I reaped the generosity I’d previously sown. Two friends stopped by unexpectedly with gifts. One brought chocolate and flowers – the very kind I’d bought to give to my lunch guests. The other made cinnamon buns and brought chocolates. The cinnamon buns – possibly her first attempt – weren’t spectacular, by her own admission. But that made me love them all the more. It was a mark of our friendship that she’d chosen to include me in the less than exceptional moments. I love being in community. For me that means being real. That my friend made the effort to bake me something and chose to share the imperfection of her creation speaks volumes to me. Those are the kind of relationships I want – sincere, honest, and an example of family at it’s best. I also got a lovely card and chocolates from one of my party guests. 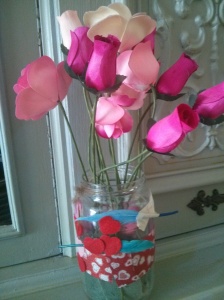 Athena made me a flower arrangement at school. Raine, who is with me every waking moment, realized too late she had nothing for me. But in the midst of a few teary moments as emotions overtook her on Saturday, Raine told me repeatedly how much she loves me. “And love is all that matters,” she reminded me of the words I’ve often spoken.

My love is full of love. Being single, I am not living without. The truth is I am living a significant life full of love.

flowers from a friend – grown with love by another friend

Raine is absolutely in love with horses. Before ever having ridden one, she’d already planned her life around having one. Everywhere we go, despite my discouragement, she asks people how much they get paid for the work they do. She’s gathering information to select a career that will give her enough money to own a horse (and buy me an electric car – but that’s another story).

When a friend told me she was putting her 3 foster children in horseback riding daycamp, I decided to send Raine as well. I was sure she’d have the time of her life.

Monday went ok. But Tuesday was a disaster. She refused to listen to the teachers – repeatedly running away from her group into a small cluster of trees. My friends girls went after her. That didn’t help. When my friend’s husband arrived to pick the kids up, Raine was completely out of sorts – telling people to leave her alone and shut up. There’s a lot of power in her verbal punches.

At home, I sat Raine down to talk to her. She dished out more of the same attitude telling me it was none of my business what she did at camp.

Instead of being happy about camp,  Raine took it as an act of rejection on my part. She thought I was pushing her away when in reality I was giving her an amazing opportunity.

The more I talked the more hostile Raine became.

“If you keep acting this way at camp, you won’t be able to go back,” I said.

Apparently, the camp instructor had been completely overwhelmed by Raine. I know how forceful she can be. I thought her love of horses would prevent any major upsets. Clearly, I was wrong.

Raine’s attitude stopped when I told her she wasn’t going the next day. Suddenly she relaxed. Then we could talk about the real problem.

“It’s too long to be away from you,” she explained.

“She needs to get used to it,” I’ve been told before by friends and social workers.

It’s true. At 6 1/2yrs this type of separation anxiety isn’t natural nor is it healthy. Before the adoption, when Raine was my foster child, she did really well at daycare two days a week. There were never any issues. But something happened with the adoption. It introduced a deep rooted fear in Raine. Likely because she was completely cut off from her first mother she worries about loosing me. She knows it’s possible. At the age of 4 1/2 Raine found out parents can change. You can be disconnected from one family and attached to another. Staying with me soothes some of the fears.

So she stayed home on Wednesday. Maybe I should have pushed her. I don’t know. Were she plagued with a physical illness, no one would think anything of me deciding camp turned out to be too much for her. Wounds of the heart are not so easily forgiven.

Our time of being together on Wednesday wasn’t pretty. Raine unloaded all of her anger. She was down right furious that I’d sent her to camp for two days. I wasn’t much help, feeling like a failure. After all this time together, my daughter should be doing better. At least I think she should. I want her to because I can see how the fear cripples her. I know my God is capable of instant miracles. That’s what I want for Raine – a miraculous healing of her heart.

After a few hours of lamenting the state we were in, I realized in many ways we’re ahead instead of behind. Attaching to adoptive parents can be difficult for children – especially in the case of older child adoption. The fact that Raine values our connection so much she’s afraid to loose it is a good thing. Fear isn’t helpful, but the valuing is incredibly significant. She really loves me and wants to be with me. As we move through our day, Raine intentionally imitates me. So much of her pursuits mirror my own interests – gardening, cooking, sewing, and so on. She wants to be like me and wants to be with me. Those are healthy signs of attachment. Maybe we’re not doing as poorly as I thought.

Yes, Raine’s behaviour is completely unacceptable. I’m not excusing the outbursts at camp. In speaking to her about it, Raine reminded me, “I live in fear.” We prayed together. I prayed breaking off fear of rejection.

Thursday Raine was ready to go back to camp. She managed without incident.

Friday, we got to watch her and the other children perform their new found skills.

I wish, for Raine’s sake, the week had gone better. I hate that fear holds her back.