Since childhood, I’ve been in love with food. As soon as I could read, I devoured recipe books. It wasn’t long before I was experimenting in the kitchen. Since then I’ve been cooking & baking, some might say, excessively.

As a teenager I worked with a lady from church catering weddings and other large scale events. In my early 20’s I thought about becoming a caterer but it seemed so daunting. I wasn’t as enterprising as I am now – staring an on-line store and publishing books.

I have helped out with events at church but yesterday had a chance to officially cater an event. It was for a neighbouring Children’s Aid Society. They rented our church to offer further training to foster parents.

With two young children and still recovering from a lengthy trip, making enough muffins and desserts for 72 adults and 16 children was no easy task. After being separate from me for a week, Raine and Athena refused to leave my side. So I put them to work.

They even came with me to serve coffee at the start of the training – since it was before the start of school and too early to drop Raine off at the babysitter’s. They choose some nice dresses to wear for the occasion. I must admit I wore a black dress with a bit of lace around the neck and hem along with a fancy ruffled apron.

Of course I had gluten free and vegan options for everything. There were lots of fruits and veggies. It would have been easier to just buy most items.  But I’m not one to take the easy road.

There were many moments that made all the work worthwhile. Mainly I wanted to honour the foster parents. I know the food generally served at these events. I’ve been to many myself. It’s usually cheap pizza and some store bought cookies. That’s not at all what I served.

I’m quite proud of how it turned out. Judging from the responses of the social workers and foster parents, my message of honour was well received.

I was 10yrs old when God dropped the dream of adopting on me (see Adoption). 25yrs is a long time to dream. I imagined bringing tiny babies home, naming them, loving them, and knowing they were mine. Of course reality hasn’t been like that. I got a 3yr old and 21mth old. I was able to give them middle names. And I’m immensely happy with their first names. I loved them slowly and not completely at first, aware that up until the adoption was legalized in January I could lose them at any moment. That’s the reality of foster care. It’s taken all of us quite a while to come to terms with permanency.

I dreamed of traveling to Europe, tea parties, blissful evenings spent reading classic literature, and home schooling. Owing to immigration issues our travel is limited to visiting family within Canada. Several years ago, when I began fostering, I gave up tea in favour of coffee. The blissful evenings may come as we work on building attention spans within the diagnosis of ADHD. I’m not sure how, as a child, I planned to be a single parent and home school…….. Oh, right! I was going to be a writer – penning celebrated novels while my children frolicked in the yard behind our Victorian home. Though that hasn’t happened, the Lord has opened doors for me to be a stay-at-home mom. Between a government subsidy and fostering, we live comfortably in a spacious home circa 1980. There is a yard. Maybe one day the children will frolic so I can write the books running around in my head. In the meantime, one thing on my list is within my grasp – homeschooling.

Sloane* began Junior Kindergarten last year. It was a tumultuous time with the adoption taking place simultaneously. Having been with me over a year, the girls were “placed” with me for adoption the day after school began. This year has been rough to say the least. Sloane began mourning the loss of her birth family. Despite seeming continually angry at me, she hated being away from me. In protest, she took to soiling herself. At different points, once the adoption was finalized with the courts, I debated taking her out of school. It was, after all, only JK. But the thought of having her home full-time was terrifying. School was clearly detrimental but I couldn’t take the endless power struggles, tantrums, and hostility. She did generally come home furious at me but at least I had a few hours of peace.

Elise* is set to begin JK in September. I could, conceivably, be without children most days of the week with a full-day 5 day a week kindergarten program at the local school.

As mentioned in my post, Progress Report, I’ve been thinking. Here’s what I’ve come up with: I’m going to homeschool. Since Sabrina* moved out Sloane has become significantly more receptive 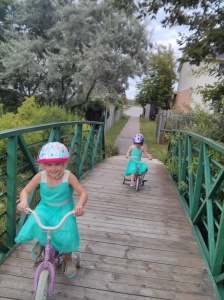 Sloane is excited about biking when school work’s done

(this past week being an exception). Her heart seems to be opening to me once again. This dramatic and unexpected shift has made homeschooling possible. At first I was going to keep both Sloane and Elise home. But after a few trial runs, thought otherwise. There’s still a lot of animosity between the two. Besides, maybe what Sloane needs is me all to herself for a while.

A fellow foster mom recently shared a quote with me, “The kids who need the most love will ask for it in the most unloving way.”

Praying I’m able to saturate Sloane with love in this season of homeschooling.

Truth seems to be an unfathomable concept for foster children. Sloane* has been with me over 2yrs (now no longer a foster child but adopted). Despite my best efforts she still doesn’t get it. Partially it’s the age – she turned 5 in February – but mostly it’s something else.

I’ve started playing a “game” Truth or Lie? with all of the kids. I will make a statement, for example: “Sloane has blue eyes”, they will answer: “truth” if it’s true “lie” if it’s a lie. This has been working great with 3yr old Elise*. She’s quick to blame everything on Sloane. When I ask, “Who coloured on the wall?” her answer is “Not me! Sloane did it!” There such conviction in her eyes, I believe her. Then I say, “Truth or lie? Elise coloured on the wall.” She hangs her head and replies, “Truth.”

Our lives have been fixated on truth or lie lately. It’s come to light 17yr old Sabrina* has been lying about a lot of things for a very long time. I’ve had suspicions but no proof. When I asked her response was so sincere I believed her. Her deeds may not seem that bad – she’s had an ipod for nearly 2yrs, stole my internet password, has been texting boys at all hours (telling me she’s doing things like folding laundry in her room). When caught, Sabrina’s response was, “You won’t let me date so I had to lie.” It’s not that I’m opposed to dating. But after some shocking revelations when Sabrina first began high school, I did ban it for her until she was willing to be honest about her actions so I could mentor/guide her. Unfortunately Sabrina’s approach to dating includes a large degree of secrecy. She’s never gotten to the point where she wants to be honest. I suppose banning it made no difference. Were she allowed she’d still lie and keep it a secret.

Anyways, some things have come to light. I’ve been unraveling Sabrina’s web of lies. We’ve been playing Truth or Lie? all the live long day which makes working a rail road seem incredibly appealing (for those unaware, there’s a children’s song that goes, “I’ve been working on the rail road all the live long day”). But instead of the back breaking work of railroad building, I’m here making Sabrina cry when I tell her she’s filled our house with lies and grown a spirit of deception in our family. It’s been an intense week.

Yesterday as Sloane returns from school, she’s excitedly shouting, “Look what I found! It’s a real bird’s nest!” That’s exactly what it looks like in her precious little hands. I let out a shriek. “Get that out of her!” I scream, chasing her down the hallway. Angrily, she dumps it out the front door.

Instantly I’m sorry for overreacting. My explanation of why I don’t want her touching birds’ nests is cut short. “It’s not a real bird’s nest,” Sloane says with distain. “I made it at school. We have things to make nests with there.”

“Oh my Lord!” I exclaim in all sincerity. Honestly, how can I teach her the value of truth? At a  loss I refuse to let the manufactured birds’ nest in the house since she lied about it being a real birds’ nest. It remains a few feet from the front door.

Let that be a lesson to you, children. 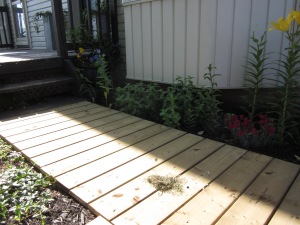