I’m canning potatoes. Outside my five and six-year-old are playing a hybrid game of Heartland and transformers. It doesn’t make sense. Five months into a global pandemic, nothing at all makes sense. After abruptly ending in the middle of March, … END_OF_DOCUMENT_TOKEN_TO_BE_REPLACED

All summer long I debated what to do about school this year. I knew for sure I would 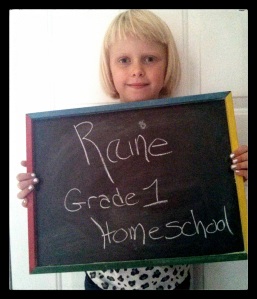 continue homeschooling Raine. But what about Athena? Her teacher was very honest in the final Junior Kindergarten report card. Things weren’t going well for her at school. Athena was withdrawn and eerily quiet. Generally when teachers or children spoke to her she either ignored them or walked away. It was impossible to assess what she’d learned because Athena would not interact with the instructors.

In March of last year the dentist informed me that Athena’s habit of skewing her jaw was creating lasting effects. Her mouth was beginning to grow incorrectly. At that point it was correctable. I started keeping her home from school most days and we worked on putting her mouth the right way among other things.

Based on those two factors I was planning to homeschool Athena this year. Still, as the summer wore on, I wasn’t sure. Her primary interest became making her sister scream. Raine’s come a long way in her ability to interact with other kids. It took a great deal of effort to get her upset. But Athena devoted herself to honing that skill. Our days were filled with lots of angry shouting from Raine followed by riotous laughter from Athena. I was not amused.

Then there was the actual school part. We kept working a bit over the summer. I would give Athena a task to complete – for example a page of the letter K. After writing one she would shout, “I’m done!” My request that she wait a minute fell on deaf ears. She’d continue shouting, “I’m done!” until I looked at her sheet.

“You’ve only written one letter. You still have lots more to do there.”

“I know,” she’d answer with a smirk. “I just wanted to tell you I was done one.”

After the next one the scene would repeat.

So……I decided to send her to school. It wasn’t my proudest moment. As a mom, I like to think I can make every decision based on what’s best for my child. This choice was in favour of what was best for me and Raine. Based on last year, I had no reason to expect school to be good for Athena. It was with a heavy heart, I got her ready to go on September 2nd. 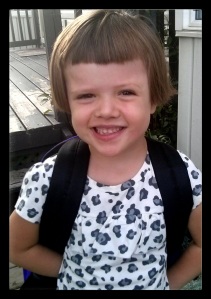 Surprisingly, Athena was eager to pose for pictures. Normally she refuses to and hardly ever smiles while I’m snapping shots. This morning she was beaming. She walked to school carrying her backpack. And ran into the fenced kindergarten yard without a second look at Raine and I.

When I picked her up, Athena was happy. Last year she was always miserable at the end of school. Never did I know what was going on because she’d angrily tell me, “What I do at school is not your business.” This year, she chatted all evening long with story after story of what went on.

Her good mood and eagerness to share have continued. Even her teacher has noticed a marked difference, commenting that, “Athena is a completely different child. She’s talkative and interacting with the kids.” The teacher and a few friends have asked what changed over the summer. Nothing that I’ve noticed. She’s remained herself – a little more bothersome at times.

With Athena my focus has been confidence. She arrived very insecure and fearful. Time and prayer have brought her to a better place. I didn’t expect going back to school to increase her confidence. Honestly, I expected her to be shy and withdrawn like last year. Instead she’s confident and self-assured.

The information I had while making the decision didn’t indicate such a positive outcome. Yet, sending her to school felt right. Guiltily, I thought it was only going to be right for Raine and I. We would get some much needed quiet. Maybe if I’d taken the time to listen a little more to Holy Spirit, I wouldn’t have picked up that guilt. He knew going to school would be the best thing for Athena. Glad I at least listened to that nudging.

“I don’t know how you manage on your own,” is a statement I often hear from married friends. Even with a helpful husband around raising kids and taking care of a home is hard work.

So how do I get it all done?

The answer is: I don’t. I really don’t get it all done. My house is an array of half completed projects. The stairwell still needs to be painted. I have new sinks to install in both bathrooms and then I’ll tackle the new floors that are needed. The basement has become a makeshift baby store as I pile up the items being given to me in case I get a baby. (Even if I do, I’m planning to ship a bunch of stuff to my sister – who is expecting – as soon as she and her husband find a new house.) There is clean laundry abounding around the bedrooms. Most days I can manage to get it down to the basement, washed,and brought back up. By that point it’s bedtime and I leave if for another day which comes around eventually.

One of the highlights of my recent childfree trip to California was staying in a tidy, uncluttered apartment. It did me good to remember one day the mess will be over. My kids will grow up. Toys won’t always litter the hallways. Dirty socks won’t appear in the most unlikely places forever. This is just a season I’m in.

Sometimes it’s hard to appreciate the season. Despite the state of my house, I do have standards and expectations that I find myself continually falling short of. I’m not a perfectionist but enjoy a sense of decorum and order. Since I started homeschooling that has become impossible. The only time I don’t have a child or children underfoot is when they’re in bed. By that time I’m so depleted I do fun things like blogging or watching British crime dramas.

Most days I feel like I don’t get much of anything done at all. I mange to put three meals of some nutritional value on the table each day. I keep the kids relatively clean – though that’s becoming more difficult with the onset of good weather. My children are drawn to dirt and mud like a magnet. On short notice I can throw together a decent family dinner when my siblings come by to visit. But don’t check the top of the china cabinet. Apparently, it hasn’t been dusted in quite some time.

This week, aside from completing my first official catering job, my greatest accomplishment was mowing the grass. My pictures don’t do it justice. The place was turning into a jungle. Now when I look out my back patio door, there’s a sense of accomplishment. It’s small, but I’ll take it. 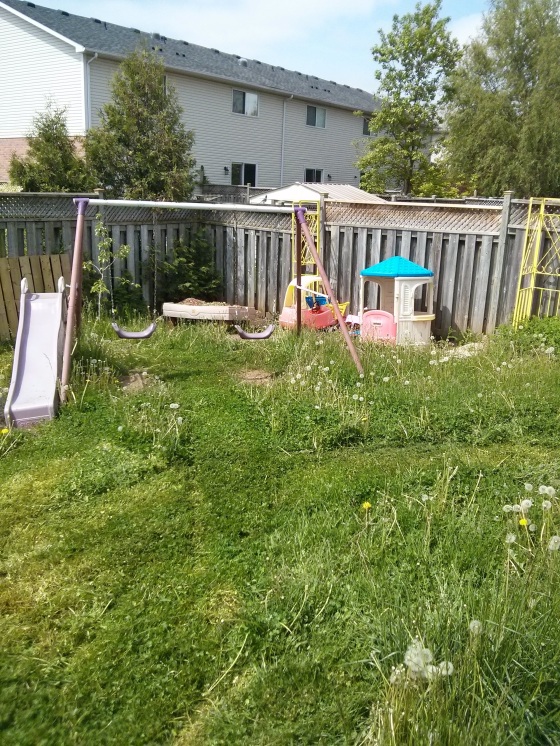 in the midst of mowing

Lately on Wednesdays, Raine and I have been going to craft & story time at

Chapters (one of my favourite places). A friend of ours comes as well with her 3yr old. He’s not much into the story and craft hosted by a very dedicated staff member. Raine, however, loves it. I must admit the crafts are somewhat advanced for the other 2-3yr old children. Being 6, Raine does them with ease and comes away with a wonderful sense of accomplishment.

My friend lives nearby so we head over there for lunch most weeks. That’s what had me making loaded baked potato soup yesterday evening. While it boiled, I was blogging. Writing makes my spirit come alive in a unique way. But I’ve realized it’s not something to combine with cooking. Wanting to get back to my thoughts erupting in yesterday’s post, I hastily threw the soup base in the blender without letting it cool properly. I just wanted to be done so I could get on with writing.

After a moment of blending there was a crack. Then the glass split. Pureed potatoes and broth spilt everywhere! If you’ve been to my house, you know the kitchen counter is a catch all. Previous weeks’ crafts from Chapters were there along with a button bracelet Raine had made, a brand new notebook, and a big bag of Easter treats, among other things were soaked in the mixture. Grabbing a few dishcloths, I dumped everything in the trash – broken blender included – and tidied up.

My counter’s now clear of clutter. Sadly this is how it generally gets done. This isn’t the first time the blender contents have ended up all over. It is, however, the first time I’ve shatter the glass because something was too hot. The other times it was for other reasons.

I’ve learned one important lesson, not to combine cooking and blogging. That’s why today, I decided to make gluten free zucchini cookies after posting.

See you tomorrow! (have some exciting adoption news to share……)

It’s Monday. I don’t mind this day at all. It brings a return to structure – or in this case another day of structure after I mistook Sunday for Monday (It’s Sunday).

Monday are the day I get down to business. It’s our day for serious school work. There are other days with structured learning, but it’s done in the midst of appointments and play dates. My girls are both in Kindergarten (Junior & Senior).

Technically Athena attends the public school down the street from us. But lately she’s been home most of the time. There’s a relatively new program here in Ontario – play based learning. I’m sure it’s great for other kids. Mine, however, require a great deal of structure and guidance. It’s gotten to the point where Athena is clenching her jaw in a strangely skewed manner. Primarily this happens at school and occasionally at home when she’s stressed or upset. The dentist noted her mouth is now growing incorrectly.

“It can be corrected,” she said. “You just need to encourage Athena to put her mouth properly.”

To save the pain and cost of extensive reconstructive dental surgery, Athena’s been staying home so I can get her jaw back to normal.

We’re on our second Monday morning. As much as my girls like structure, I must admit I do too. But I also love the opportunity to drop everything to go visit a friend. In addition to academics, Raine requires assistance in socializing. Somehow any skills she learned in daycare went out the window. She attended a full year of Junior Kindergarten last year. It seems in play based learning children are given the opportunity to work out differences on their own. Raine’s has a strong personality. In the unstructured environment, she tended to resort to domineering her peers. At such a young age, she still needs guidance on how to interact. So we take advantage of invitations to visit friends whenever they come.

But generally Monday’s are spent at home doing school work, laundry, and putting things back in order from my weekend “off”. I like to pretend I have a Monday – Friday job. Often I don’t do laundry or mop floors on the weekend. But Monday I’m back in the swing of things.