The longer this child lives with me in our current state, the more likely she is to leave. It’s a defeating reality. Prior to moving to Wolfe Island, two years ago, I stopped fostering. With four children adopted from the … END_OF_DOCUMENT_TOKEN_TO_BE_REPLACED

As a single mom of five kids with a variety of needs, most of my time is spent putting out fires so I can get things done. Those monotonous things like laundry, dishes, school lunches, and what not. Seems like someone always needs something which makes accomplishing anything almost impossible.

Last night was no exception. I bought a ton of plants for the garden I’m attempting. It looked like rain, so I really wanted to get them planted.

Solving the problem of what to do with the attention seeking 11yr old, I left her inside to do dishes and sweep the floor.

On the deck, the 9mth old baby was put in her new Jolly Jumper. 9yr old Athena was skipping on the driveway. With pencil and paper, 5yr old Adley pretended to write notes about his observations of the garage. 4yr old Branch rode his tricycle.

Knowing it wouldn’t be long before someone needed something, I frantically began planting.

It started to mist slightly. Branch needed his raincoat. Adley suddenly realized he needed a coat as well. Baby was fussing since no one was within arm’s reach. She hates to be alone. Branch was worried she’d get wet under the canopy. He worried he’d get wet. A lengthy conversation ensued that we’ve had countless times.

“The water won’t hurt you.”

11yr old Raine stepped out to ask if she in fact had to wash all the supper dishes or if some were exempt. I kept on planting – not with the leisure or enjoyment I’ve known in other phases of my life. I kept on because there aren’t enough hours in the day.

Suddenly the mist turned into a torrential downpour. I prepare to abandon my task. Thunder and lighting silence all the children. Raine, having completed her chores joins the baby on the deck.

The eco friendly pots my herbs are in begin disintegrating in the deluge. Still, I resign myself to the fact that we must go in. If Branch couldn’t cope with a sprinkle, I suspect it won’t be long before he’s hysterical over this.

Only he isn’t. “The water doesn’t hurt me!!” he realizes, tossing off this raincoat and running down the driveway with Athena. She’s laughing. He joins in. Adley and Raine come trailing after them. The baby, dry under the canopy, lets out a squeal of delight. The lightning flashes. The thunder rolls. The rain pours down. I plant the herbs. The baby jumps. Together the children run and laugh. It’s a perfectly unexpected moment of collective joy.

There aren’t many of these. I breath it in. For an unprecedented 10mins, no one needs me. My imagination takes flight, thinking of what this work in progress will become – my garden, my family.

When I’ve done all I must, we head inside.

The rain stops. A rainbow graces the bright blue sky. It was a beautiful, picture perfect moment in a life that isn’t always so. 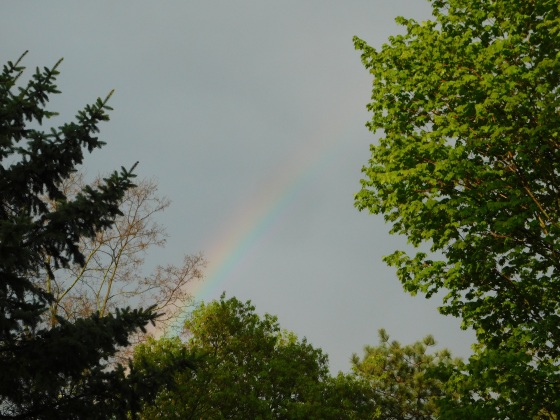 Today I am 41. Last year, I celebrated my 40th birthday with an array of friends and family. This year it was my sister and I and our children. Like every day, today was full of hustle and bustle. Children … END_OF_DOCUMENT_TOKEN_TO_BE_REPLACED

Two years ago the call came. “I don’t know why I was hesitant,” the social worker said. “Once I met you, it was clear you’re the right family.”

My son, Adley, had languished in foster care for more than half a year once he was eligible for adoption. His social worker, who had been on the case since he entered the system at birth, was devoted to him. She wanted what was best and didn’t see how that could be me. Due to his special needs resulting from a micro deletion and micro addition genetically, her wish for him was a two parent home without any other children where he could be the primary focus. A single mother with two adopted children was not ideal.

She waited. She searched. She tried to find what she thought was best. I appreciate her concern and dedication. Having been told I was not a possibility, I’d attempted to convince Raine and Athena that he was not going to be their brother after all. They would not believe me. I’d made them no promises. I’d not even introduced the idea to them. It was something the girls determined on their own. As they visited with Adley at my friend’s house where he was being fostered, they decided he would be their brother despite being told all along it was impossible. To begin with, adoption was not looking likely in his case. Then, when at last it was, our family wasn’t a consideration.

Without any other options, the adoption department pushed the social work to at least meet me. Reluctantly, she agreed. Then we waited for her decision. Raine and Athena’s faith was unwavering. I knew the system well enough to know nothing was predictable. The meeting seemed to go exceptionally well but that was no guarantee.

“Yes,” a stranger at McDonald’s playland recently said, “This is the right family for him.” The woman, a recently retired special needs EA, had watched my crew intently after I shared how we came together through adoption.

Easter morning 2018 – Kinder Eggs and Lego (Duplo for the boys, but they like to call it Lego)

“He has one older sister who really challenges him,” she said of Raine who was climbing in the structure calling to Adley to come up with her. “Another who is a little mother, encouraging him along,” she said of Athena who often came beside to gently lead him out of hesitation. “And a younger brother to run with,” she said of Branch. The two boys had taken off together in a rush when I announced they could leave the table and go play, that’s what had initially caught the woman’s attention.

“This is the best thing for him,” she said with certainty, as I sat back drinking coffee.

There are times I’ve wondered. Adley’s progress has been astounding since he came to me. He’d doing things previously thought impossible – eating on his own. There was a time he was choking so often a feeding tube was being considered. He’s speaking, sometimes in complete sentences. It was thought unlikely he’d ever communicate with words. His comprehension is often surprising. “Unless you have his full attention and speak directly to him in very simple words he won’t understand, “ his therapy team had told me in August before we moved here. We continued to do that. Yet often when I’m not speaking to him at all, Adley understands what’s going on.

When I told Raine and Athena that he wouldn’t be going to school last Monday because he had a dentist appointment, Adley jumped into the conversation, “Tooth. Pull. Out. Gone. No doctor,” he said. The week before, he’d fallen at school and cracked his front tooth. An emergency trip to the dentist had resulted in the tooth being pulled. We were returning to check on how he was doing. Adley understood the word dentist though when speaking directly to him I’d always used doctor. He remembered what had happened and could explain it. And he didn’t see any reason to go back since his tooth was already gone. The many facets of that interjection were considered to be absolutely impossible when he first came to us. The team of therapists who had worked with him since birth didn’t anticipate him to ever reach that level of comprehension and communication. It was a hope, but not something they were expecting.

This morning while waiting for the bus, he was jumping in puddles with his sisters like any other 4yr old would. Both feet left the ground as he tried to make splashes as big as theirs. When he came, there was still the real possibility that he could be wheelchair bound. That’s not even a consideration now.

I worried about making a move that would result in Adley being in a regular school instead of one specifically for special needs children which is where he would have gone had we stayed where we were. It was a risk I took with the encouragement of the team of therapists who had worked with him most of his life.

The school here on Wolfe Island has been outstanding. Being the only child with extensive special needs, Adley is able to access the full amount of funding designated for this area of education. He gets the same equipment he would have gotten at the special needs school. He has a one on one EA. He has friends who encourage and challenge him. At the little island school, he’s known and loved by all. Children fight over who gets to sit with him on the bus. From JK to Grade 8, the children are cheering him on as he makes exceptional gains.

When God brought us together, He knew where our path would lead. Though at the time I had no idea we’d find ourselves on this island, God knew. It’s been such a special place for Adley. Not only is he accepted despite his special needs, he’s celebrated in ways I never imagined.

Looking back on the boy who joined our family two years ago, I can hardly believe it’s the same child I watched splashing in puddles this morning.

When I said yes to Adley it was with the knowledge that those simple milestones might never come. I said yes to loving him in the limitations of his condition. In love, he’s been able to grow and exceed many of the expectations. Today, I’m celebrating the son God saw fit to give me. He knew we were the right family for Adley. And I’m grateful for the opportunity to love him.

Today Raine is 10 years old. When she arrived, a month after her 3rd birthday, I didn’t imagine we’d get to this point. The chubby little girl with a big, gruff voice wasn’t mine then. I was to be a … END_OF_DOCUMENT_TOKEN_TO_BE_REPLACED