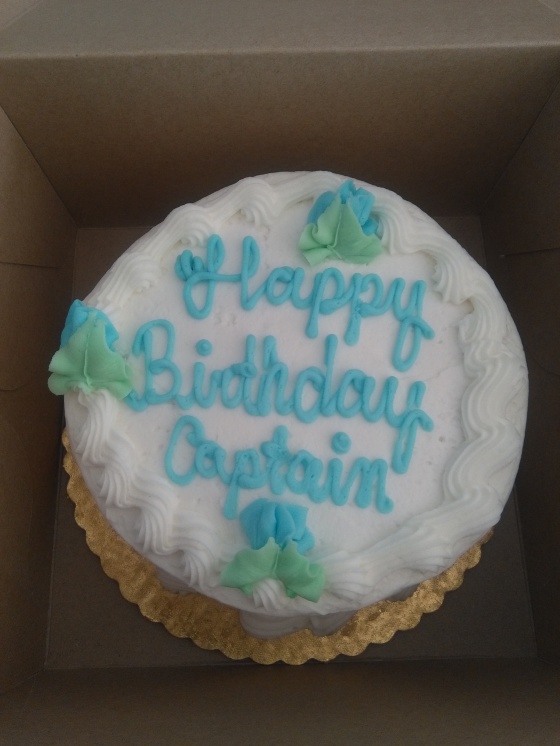 I’ll take any excuse for a cake – especially from one of the bakeries in town. Today our puppy is one year old. It’s still hard to believe we have a dog. Before Raine and Athena came, and for quite a while after they arrived, I had an older foster child. She was always pleading with me for a dog. I refused but did take any and all dog sitting opportunities that came our way. That’s how we ended up often having an elderly black lab, Duke, with us.

Raine loves Duke and really thought we should have a dog of our own. She was always very gentle and responsible with our charge, cleaning up messes and continually refilling his water bowl. A little more than a year ago, I realized Duke would soon leave us. His owner is very happy to share him, but the dog is getting on in years and won’t live forever. It seemed wise to get a dog of our own before Duke’s departure. So, I began reading up on dog breeds. I’d always dreamed of a Great Dane but didn’t seem practical with the children. In my search, I came across Bedlington Terriers. I’d never heard of them nor seen one. But the more I read, the more right the breed seemed for us. They’re a medium sized non-shedding breed. They love jumping, something that the girls adore doing, and aren’t supposed to bark much (though there’s always an exception).

Sold on the breed, I began looking for a puppy. I understand the push for adopting dogs from shelters. Unfortunatley, most shelters aren’t eager to work with families who have young children. And foster children are usually a deal breaker for most rescues. Added to this fact, was the value of breeding in dogs. With a well-bred dog, I could expect a gentle disposition. Overcoming past trauma with a dog was a challenge I didn’t feel up to since I’m already dealing with that on a daily basis with my children. So, I was set on a pure bred and really wanted a Bedlington. Then, I discovered how rare they are. Only about 200 born in the US each year and even less in Canada. It looked impossible. I contacted a few breeders but none had any litters planned. I tried to find another breed that would suit us.

On January 21 and decided to look up all the Bedlington breeders around one more time, before moving onto to something more obtainable. Surprisingly, one about an hour away had just posted that he had a male puppy born January 4th available. I made inquiries. We did a phone interview. The breeder was impressed with me and not afraid of the words foster child. (At that time we had J with us.) He asked us to come for an interview at his home. I was nervous. J was in school, so Raine, Athena, and I set off for Toronto one day. I explained to them that the breeder had many families interested in the puppy and that it was unlikely he’d choose us. Most often, my girls do not do well in new situations. They become very anxious. For Raine that manifests as being loud, disobedient, and rude. Athena becomes quite and withdrawn which also appears as rudeness. I went ready for our request for a puppy to be rejected. A few minutes with my girls were sure to turn the breeder off. This is the reality of our life.

But when we stepped into the breeder’s home, both girls miraculously remained at peace. I could feel it as they followed me into the living room. The puppies were still very tiny and the breeder wasn’t sure he was going to introduce them to us. He brought out his two female dogs, one being the mother and the other an older Bedlington who was nearly blind. Normally neither cared much for strangers but both came right over to us. Raine and Athena completely ignored the dogs, as they’d learned to from watching Cesar Millan. The mother dog curled up beside Athena on the couch. The elderly one begged to be pet by Raine and I.

“Your children are so calm,” the breeder exclaimed. He loved the feeling of our family so we got to see the three puppies. There were two girls, already spoken for, and the boy in need of a home. The boy puppy stayed in his pen while his sisters came out to visit with us. Raine and Athena remained calm and quiet. It was like a dream I expected to wake from at any moment. This is not how things go when we visit people. The girls are usually like a whirlwind. But today they were at their best, something I’m usually the only witness to.

“I’m sure you have lots of families to consider,” I said to the breeder, not wanting him to feel pressured to make a decision.

I told the girls the shocking news as we drove home. “I already knew we’d get the dog,” Athena answered. “Jesus told me when we were driving here.”

While we thought of a name, the breeder called our puppy Thomas. My grandfather’s name had been Thomas. He passed away before I got any of my children. I know he would have loved them. He was quiet and gentle, which was exactly what our puppy seemed to be.

I decided to call him Captain Barnaby Howden. He’d just go by Captain but the Barnaby meant “son of consolation.” Being chosen for the puppy meant something because I hadn’t been chosen for the two boys I’d been waiting to adopt. The social worker was worried about me being single. Though there were no other options for the boys, she wasn’t willing to consider me. “So, I’ll have a dog,” I thought and dreamed of training him and entering competitions. It could be something fun for the girls and I to do.

Then, the social worker decided to meet me after all. Once the meeting was set for early April, the breeder called to say our puppy was ready. On Friday, I met with the social worker who had previously rejected me as a match for the boys my friend was fostering. Not having found another family, she was willing to talk with me. She asked many questions and raised lots of doubts. I was promised an answer within a few days. Only the oldest of the boys was adoptable at that point, the younger was still unavailable. I didn’t know what the decision would be. But we had a puppy, picked him up the day after our meeting with the social worker.

“Even if we don’t get to adopt the boys,” Raine said, “we still have a brother now. A dog brother.” She had been waiting as much as me for the adoption to happen.

Captain was quite and shy at first. He was afraid of the stairs and mostly kept to himself. With time, he’s grown into a kind companion. As for barking, he is the exception to his breed. He barks a lot – the trainer at puppy class says it’s because he’s an unfixed male. He seems to want to let every passing dog know he’s here. But, given the chance to greet the other dogs, he’s as friendly as can be. He follows me around the house and is determined to chew on my pin cushion whenever I’m sewing.

In the end, the social worker did select us as the family for the boys. One of them came a few weeks after Captain’s arrival. It was somewhat nerve wracking wondering how the puppy would be with the toddler, but it’s all been fine. We’ve not done much training and won’t be entering any competitions soon, but Captain has been a joyous addition to our family.

Today, we celebrate his first birthday and the miraculous fact that he’s ours.