As you may have detected in my last post, I was rather nervous about this weekend. In addition to my own girls – 6&4 – I had three foster children coming – aged 6, 5, and 2. March break was a flop with a rather difficult 3yr old visiting while his foster mom was away. The reports described him as much less challenging than he really was.

Thankfully in this case the opposite was true. Night terrors, difficulty sleeping, and aggressive behaviours were all listed. But these little ones really surprised me. They were well mannered and easy going – except for the 2yr old. He was a bit of a handful. Mainly the struggles stemmed from the fact that he hardly speaks. He’s a bright little boy who understands everything going on around him. Slowly he’s learning to articulate his thoughts and desires. Often he’d get frustrated with me and the kids because we didn’t understand his small gestures and sounds. In many ways I was reminded of the initial struggles with Elise*. She arrived in a similar state.

Sloane* connected well with the 6yr old boy. They dressed up in superhero 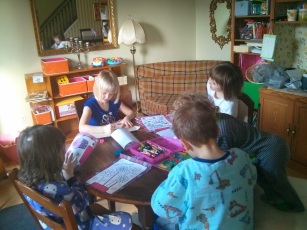 costumes – something Sloane had requested for Christmas. Elise and the 5yr old girl dressed as butterflies and hosted tea parties. It was a beautiful time.

I even managed to disconnect the dishwasher Sunday morning trying to discover the reason why it wasn’t draining properly. Doing all I could to solve the problem, I left it and got myself and all the children ready in time for church. This brought an amazing sense of accomplishment. However, we discovered the 6yr old’s boots hadn’t dried from being outside yesterday.

Scrounging through my reserves – seems somehow I have every shoe and clothing size imaginable – all I could come up with was a pair of white high tops with pink and gold accents. Though I do have an incredible array of clothing 80% of it is girls. Since he couldn’t be persuaded to wear the sneakers, we didn’t go to church.

The children left happy, asking to return soon. Sadly it’s unlikely we’ll cross paths again. Despite the threat of night terrors, we made it through two nights with only a minor incident. At 3am Sunday morning, the 5yr old girl, quietly crying, came into my room. “The wind is bothering me,” she said. The trees along the exterior wall of her room can be quite boisterous as they scrape along the siding. She decided to switch beds and went right back to sleep. I even managed to shower both mornings.

After that success, I’m feeling a bit more in the swing of things as a foster mom. I’m surprisingly refreshed after that busy weekend.

One thought on “Now That was Fun”