Yesterday I took Jake* for a hair cut. Just before dropping him off to me, Jake’s foster mom finally got permission to trim his hair. It’s been too long since he came into foster care but the go ahead from his birth mom was required. Finally getting it, Jake’s foster mom didn’t have time to complete the task before leaving for vacation.

“If you want to you can,” she said. It did seem wise, he was looking unkept and hair blocked his view. But it was frightening. I didn’t know how he would respond. Baths and showers bring on absolute panic. Jake kicks, pinches, and screams. I was anticipating something of the same with a haircut.

My plan was to put it off as long as possible. Then when I woke yesterday with an urgency, “We need to do this today.” So we set off, stopping at the park briefly. The local chain of discount hair cutters wasn’t too busy. We had to sit through the cut of one other customer. I brought ketchup chips, cheesies, and pretzels. Not ideal – they were pretty messy – but novel so it kept everyone occupied. My own kids don’t have much experience with hair dressers so I was expecting a million questions.

Then there’s Jake who is a handful in the best of moments. We all managed beautifully. The male hair dresser was kind and enthusiastic. His parents fostered when he was growing up. He understood and was willing to work with the situation. I held Jake trying to keep him still which never happened. The hair dresser did what he could any way he could.

Just before we began that balancing act, a lady from church arrived with her grown daughter who needed a haircut. The lady kindly occupied my own girls, answering their questions and carry on a lengthy conversation with Raine. That enabled me to completely focus on Jake without Raine & Athena feeling neglected. They were very happy to have someone else enjoying them.

The urge to go to this place at this time was a small one. It could have easily been ignored in favour of fear. I’m glad I listened. We got the right hair dresser and the Lord even provided someone to help with the other kids. These small graces remind me the Lord is mindful of my situation. 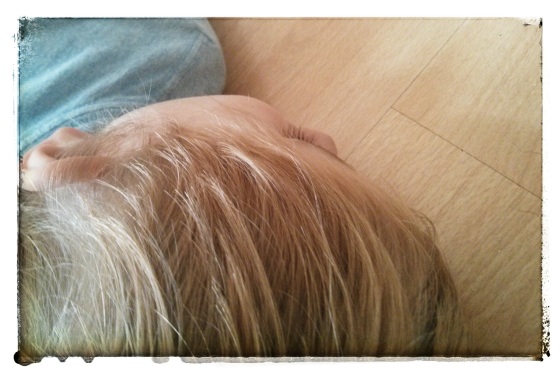 Jake recovering at home on the floor after his hair cut

Jake* has been with us the past three weekends. Today he returned and will be staying for 10 days while his foster family are on vacation.

Tuesday, August 5th my social worker met with me to do some training. Then she announced my probation period had come to an end. It was supposed to be 6mths but, thankfully, has been shortened. The reason for the leniency was the hope that Jake could move to my home.

Thanks to some inquiries made by my friend who works for the same fostering agency, I was ready for the offer. And had my mind made up. “For the same reason it’s not working where he is, it won’t work for us.” His current foster mom is requesting shared care. Between the two of us we could likely manage. But Jake, without school or daycare, is a little much for anyone.

He’s sweet and caring. When he goes non-stop then doesn’t sleep all night, it’s tiring for his caregivers. There’s no way of knowing if he’ll sleep or for how long. Being on call 24hrs a day, 7 days a week isn’t feasible. It’s just not. 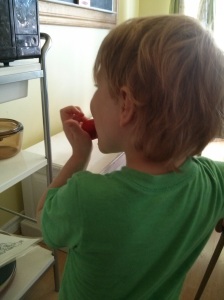 Jake snacking on tomatoes while I try to can spaghetti sauce

So I said no. The social worker didn’t really understand. She used to work with autistic children in a school setting. Her suggestion is reward charts and using candy as an incentive. That may work for Jake in the future. At the moment he’s not able to understand. So that means endlessly redirecting and trying to anticipate what he might do. And sitting up with him into the wee hours of the night, waiting for him to fall asleep so we can wake in a few hours and start it all again.

I know he needs a home. He deserves to settle down, in a loving environment. But I’m not able to provide that long-term.

There are three things I need to pull off this single parenting gig I’ve gotten myself into: a good night’s sleep, time alone each evening, the opportunity to connect with friends. With Jake, I don’t get any of those things. We will make it through the next 10 days. But I can’t commit with no end in sight.

Sorry. That’s just the way it is. Still, knowing it won’t work doesn’t make the decision any easier.

Last weekend we had a 3 1/2 yr old little boy with us. I knew what I was getting into, but his foster parents didn’t when they said yes to the placement call. 3 1/2 sounded good. According to the social worker, there was a “slight possibility” of autism. The diagnosis hasn’t come yet, but autism seems fairly certain.

The little boy is vocal (makes noises) but non-verbal (doesn’t say any actual words). He’s much like an 8mth old in the body of a 3yr old. He can run, climb, and maneuver around. But like a young baby, there’s no consideration or comprehension and everything goes in his mouth. 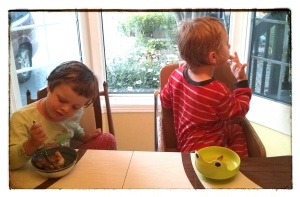 bedtime snack after the splash pad

It was challenging but we made it through the weekend. Monday I got a call asking me to take him for 2 1/2 weeks at the end of August while his foster family are on vacation. With nothing else coming along, I said yes.

Today his foster mom called the social worker begging for some extra support. He’s only been sleeping a couple hours each night. That wouldn’t be so bad if he stayed in his crib. But he climbs out and escapes from his room. Obviously it’s not safe for him to be wandering around alone. So his foster mom has been up with him all week.

He’s back with me this weekend so she can get some sleep.

Forgive me, if you saw me at the splash pad this evening. He loves water. It’s the only thing that captures his attention for more than a fleeting moment. Jake* did really well running and playing. Periodically he’d check in with me as I watched from the edge.

Then I shifted position to say hello to a lady from church. After a while Jake began looking for me. He rarely responds to his name. Words seem to float outside of his comprehension. So, after saying his name I clapped. Gasp. It generally works in getting his attention. Like a typical, healthy 3yr old he can run like the wind. Not wanting him to bolt, I tried to get his attention. And I did. Please forgive my method.

Raising unique children, often I need to move past normality. I wouldn’t normally clap or snap at a child. But for Jake the clapping works (not great at the splash pad where there are lots of other loud noises, but at home it’s effective.) Snapping works great with Raine. Sometimes she’ll get herself in a tizzy where words can’t reach her. Then I snap and she can hear me again.

Sometimes in this life/job the rule book has to go out the window.