5yr old Athena is spectacularly good at peeling wallpaper. I know this because she’s done it many times in a variety of spots. Occasionally it’s done out of anger. Most times I can’t figure out why she’s picked and plucked at my beautiful walls. I was quick to blame myself – I must be missing something she’s trying to communicate.

Then one evening, I was painting the upstairs hallway. Athena had been home from school that day, as she often is. I’d made a point of spending lots of time with her. At bed, I read her books and stayed to talk for ages. Raine, having a separate room, had gotten her own alone time with me as I tucked her in. I closed the doors feeling as though I’d done everything possible to nurture my daughters that day. Opening the can of paint, I realized I’d forgotten the paintbrush. To the basement I went. When I returned, paint was smeared all over the floor.

I entered Athena’s room and told her about the situation, asking her to go wash her hands properly so she wouldn’t get paint all over the bedding.

“I don’t have paint on my hands,” she sweetly informed me.

Earlier in her life, that little voice got me every time. For a while Raine ended up in time out for the messes Athena made because both swore it wasn’t them. And Athena’s gentle demeanor seemed much more believable. Then I caught her in the act of clogging the bathroom sink with chunks of hand soap.

There are times when Athena will march into the bathroom and slice the walls with a stick her sister forgot on the ground because she’s just been sent to her room for some infraction. Then there are times when she peels all the paint of a door jam while she’s supposed to be watching a movie with friends. After saying it wasn’t her, Athena shrugs and says she doesn’t know why she does it.

I don’t know why. As a person who like to know, this really irritates me. Since there’s not much rhyme or reason, I’m trying to be more diligent in keeping tabs on her. And I’m choosing not to blame myself because even on my best day as a mom I ended up with paint all over the floor.

But today, Athena got to make the most of her experience in peeling wallpaper. She helped me strip 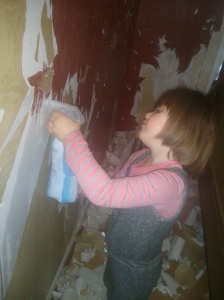 away the coverings in the dinning area to make room for the new paper she helped pick out.

She was absolutely delighted – ripping of the top layer, spraying, and pulling off the 2nd layer.

Another 5yr old, who is visiting while his foster family are on vacation, loves cleaning. When I announced we needed to get the torn wallpaper off the floor because a friend was coming for lunch, he set to work. There were a few questions about my friend and her two boys. It was clear his anxiety was mounting. Turns out sweeping warded off a breakdown. He focused on getting the wallpaper tidied and swept all the floors – only stopping when I promised he could do it again after our guests left.

It would be lovely to have a solution to Athena’s destruction and our visitor’s anxiety driven cleanliness. Without that, I’m enjoying my daughter’s skill at tearing down wallpaper at this welcomed time and the other little one’s delight in cleaning it all up.