Blessed is she who has believed that what the Lord has said to her will be accomplished. Luke 1:45

Years ago in the Christmas season this verse came to me. I’d read it countless times. But that year it dove deep into my heart. I was struggling to believe. Days later at work, I picked up the phone to find a woman on the other end asking if I’d like to adopt a foster child in her care. Why she ended up calling me remains a mystery. She was looking for someone else in the office but mentioned my name to the receptionist. At that point, not too many people knew about my dream to adopt. Of course the Lord was aware. He’s the one who spoke the idea into existence (see Adoption). That call came to nothing for me or the other married couple seeking a child. But it did remind me that the Lord would accomplish all He said. That year I made cards for everyone in my office featuring this verse. A few years later I tattooed believe my right arm, an ever present reminder as I continued to wait. 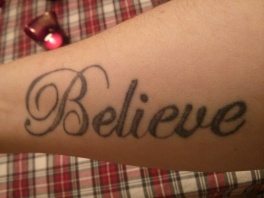 tattoo on right arm as a reminder to believe

This year the wait is over. At the end of January 2013, Sloane* and Elise* legally became my daughters. The long anticipated dream of adopting came to pass. It’s been a roller coaster of emotion and experience. After some amazing prayer for Sloane a few weeks ago, I feel like we’re finally on stable ground. Today she made up a song about two babies who grew in one mom’s stomach. Because that mom couldn’t take care of them, those babies came to a new mom who adopted them. “And it’s good!” she exclaimed.

I often think of Mary, blessed with the words of Luke 1:45. Did she know everything that would transpire? As she and Joseph set out for Bethlehem, did she understand the Scriptures naming this as the Messiah’s birthplace? Or did she see it as a horrible detour? Were there moments in the journey when she struggled to believe? In my own journey there have been many times doubt crept in. Despite the tattoo, many gifts from friends with the word believe, and naming my company Believe bistro (www.believebistro.com) there have been times I’ve struggled to believe.

Long ago, in the midst of waiting, I came across the Christmas musical “Child of the Promise”. So often I sang along with the words written for Elizabeth, “it must be God when the dream never dies.” With all the trials, disappointments, and discouragement my dream never died. I continued to believe.

There’s so much I want for my daughters. I have these perfect ideals. Still their past is something I can’t change. Both were born addicted to pain killers. They spent weeks in the hospital being weaned off those drugs. In praying for Sloane a few weeks ago, the Lord showed me a picture of her newly born in the hospital. He whispered to her, “It’s ok. I have a new mom waiting for you.” Somehow, through prayer, the Lord has eased the distress Sloane’s been living in. For the first time in her short life, she’s at peace. Her song is absolutely beautiful.

The Lord accomplished what He said to me. He’s given me, as a single woman, two children through adoption. I’m living in the blessing of believing.

This Christmas our family of three will be together on our own. It looks like our foster child, Joseph (see Love is Important) will be with his father. I’m rejoicing in the blessings afforded to me because of my tenacity to believe. The Lord has accomplished what He said. I know God will continue to bring beauty for ashes. I continue to believe. I am blessed. My children are blessed.