I’ve not ventured into the world of Instagram, despite many suggestions.

I received some lovely flowers. My friends know me well!

The problem is, I’m forever forgetting to take pictures. Even with the ease of having a camera on my phone, the thought doesn’t generally doesn’t stay in my mind.

Today I celebrated my 37th birthday with a few friends. Hosting a party became a grand undertaking, especially with three extra little ones underfoot. The 6, 5, and 2yr old who visited us not long ago (Now That was Fun) returned this weekend. I must say this time, with something else on the agenda, it wasn’t as much fun.

The house was an absolute disaster an hour before the party. There was no time for pictures of the freshly polished silver all put out. I tried to capture my daughters in the dresses I made them for the occasion, but didn’t get a clear shot. They dance, and jump, and prefer to pick their noses whenever the camera comes out.

More lovely flowers – I can’t properly capture in a picture.

Bribing the children with candy got the toys at least out from underfoot before our guests arrived. We enjoyed a chocolate fountain with fruit, nuts, and cookies to dip. I put out my grandmother’s wedding china. There were flavoured syrups – gingerbread, French vanilla, Swiss chocolate, caramel, and hazelnut – to mix with sparkling water for my own take on soda pop.

It was lovely. Not all my friends were able to make it. But there was a nice turn out. I may have neglected some guests in favour of two friends I rarely see. We grew up together but live a bit of distance from each other now.

the aftermath of our table

Each guest is a gift to me. Their kind words, encouragement, and willingness to lend a hand make my life possible. Indeed, I would have given up on the party preparations had it not been for a friend who arrived early.

I believe the party to have been a success. But I’ve not pictures to prove it. The thought crossed my mind before the guests arrived, then didn’t enter again until they were gone. At which point I snapped a few. Entire chapters of my life have passed without a single snapshot. Some of my most precious moments have not been captured. I do apologize. My life doesn’t quite fit into Instagram or other forms of social media.

A sentiment expressed in one of my favourite novels by my favourite author makes this fact marginally less tragic.

We owned a Kodak Brownie camera – everyone in Rochester did – but my mother forbade its use. “They stop things,” she would announce whenever the subject of cameras arose. “They interrupt the normal flow of event. Furthermore, they eliminate things. If I take a photograph of this,” she would say, pointing to a beer factory across the Genesee River, “I obliterate this and this.” Even now I can see the way she gestured as she spoke, her arms sweeping back and forth, conjuring the rest of the world, the world that a photograph might have obliterated……

The Underpainter by Jane Urquhart

Perhaps the fear of obliteration is what keeps me from excelling in photographing my life. Maybe it’s the fact that things are never quite picture perfect. I’d like to think it’s because I’m too busy enjoying myself. Today that was certainly the case. 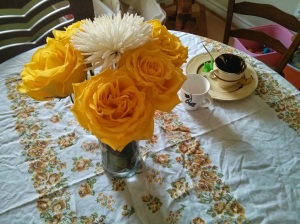 My place, not yet cleared.

Athena helping me to tidy up. 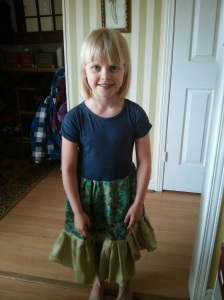 Raine happy after an afternoon outdoors with friends. The mud and chocolate may not show up in the photo – but they’re there.