So do not throw away your confidence; it will be richly rewarded. You need to persevere so that when you have done the will of God, you will receive what He has promised.

I thought getting to the island would be the hard part. The selling of my house in Beamsville. The packing up. The leaving behind. The letting go of friends, family, everything familiar. Every part of our life changed in making this move.

With confidence, I came anticipating the reward of faithful obedience. I came with no idea that the perseverance was not nearing completion but only intensifying.

Had I known, would I have come? It’s impossible to say. There are so many things God doesn’t reveal when He unveils the picture of His promise. For each of us, I believe, He has a carefully designed picture of where He’s taking us. Over a lifetime of walking with Him, there can be many pictures. For this season in mine, He revealed a home on Wolfe Island.

Seven months into life on the island, that home has yet to materialize. More than once, I thought it had. At the last minute, the doors keep closing and I’ve be left without any option beyond remaining where I am. In three months, even that option comes to an end. Our gracious landlord has made it very clear there is no way our temporary rental can go beyond the month of June.

As spring creeps close, several summer options have come up.

But a home on the island remains elusive.

Our time here has made it abundantly clear, THIS IS THE PLACE FOR US! I am not throwing away the confidence I have that God prepared this place for our family.

I continue to persevere, so that I will receive what He has promised.

“So, what we know about God,” says 10yr old Raine after I recount all His goodness and the times He’s faithfully fulfilled His promises for our family, “is that He loves surprises. He doesn’t tell us about the surprises. And He likes to wait until the last minute.”

Beyond that, I know He hasn’t brought us this far without a plan.

My children are excelling in ways I never imagined possible.

18mths ago, Athena was undergoing tests to see if a genetic condition was impeding her ability to read and write. Despite best efforts, she wasn’t learning to read and writing – even her name – was a struggle. As a toddler, there had been a diagnosis which I didn’t receive the details of. Athena progressed so substantially after she came to me and even experienced complete healing of the physical signs of the genetic condition that at the point of adoption, it was unclear if any concerns remained. Then she wasn’t progressing academically. Her hands would not comply in forming letters. She said it was all too hard.

I came to this island, with the acceptance of limitations. I didn’t come looking for a cure. I came in search of a place willing to embrace the reality of our limitations. The Catholic school on Wolfe Island graciously extended such an offer. They didn’t shy away from the list of challenges I brought to them in our early communications.

Never did I anticipate moving past those limitations to a place of being able to soar. Yet that’s what’s occurred for Athena. In a short of amount of time something that seemed impossible is happening. Without an official diagnosis that would have garnered her specific interventions, she began almost instantly to read and write. Both are now her preferred activities. When free to occupy herself at home, she sits down to write stories or read aloud. This is a girl who, more often than not, would only put her initials on items when asked to write her name.

It’s not that we were in a bad place before. The school in our area was wonderful for other children we know. The homeschooling curriculum I used when going that route was an excellent tool for others. But there’s something about this island that makes it possible for not just Athena but all my children to soar.

As far as I can see, this place isn’t one of passing for us. It appears to be a place we’re meant to become rooted in.

Not long ago, 3yr old Branch stumbled beside me. The sidewalks were covered in deep snow, so much so I’d abandoned his stroller in our walk from the island garage to the post office. Not only did he refuse to be carried, Branch insisted on “helping” me with the parcels we’d received. The box he selected wasn’t heavy, only containing a light weight laptop case, but was nearly half his size. I expected him to quickly give up.

He didn’t. Every step required incredible effort. It wasn’t a graceful journey. There were countless times he lost his grip on the box. Countless times he fell into the mounds of snow blocking his path. Giving up would have been understandable. Watching him struggle, it was the logical choice. 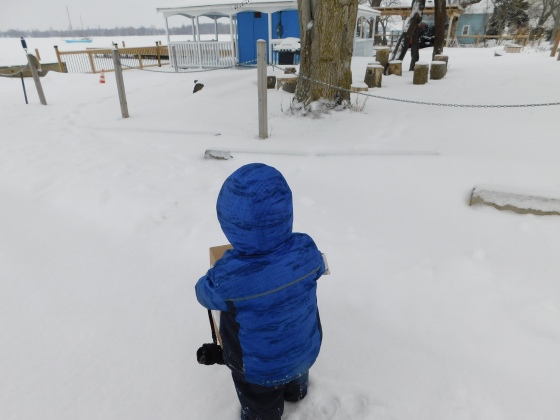 “No!” he replied. “I take it to the car.” His goal was fixed. There was a value he saw in this mission.

Were we anywhere else, I never would have permitted it. The fear of another mother snapping pictures and shaming me on social media would have prevailed. But in the wilds of this island, I have no reason to worry about that.

Instead, a stream of elderly farmers passed by in their pick-up trucks. Each one slowed to a stop. Rolling down their windows, they shouted at my son.

“Look at you! You’re such a good helper to your mom!”

“What a good worker you are!”

“Look how strong you are!”

Their faces exuded excitement as they looked past the struggle and saw the value of persevering. That’s what we’re learning here as a family.

Faith does not always clear the path for us. But it makes persevering through the obstacles possible.

Those words of encouragement not only strengthened my 3yr old’s heart, they strengthened mine. I hold to them now. There are so many things I want for my children that can be obtained here on the island in ways I’ve not found elsewhere.

So, I do not throw away my confidence. I need to persevere to receive what God has promised – a home for us here on Wolfe Island.

One thought on “Persevering”