Finally a blog with pictures! (Though I can’t figure out the spacing and  sorry it’s another long one….

foreign to her. I’ve never known a baby who didn’t squeal when tickled. Elise just started at me with disgust no matter what I did. She was stiff and unresponsive – completely unlike her bubbly 3yr old sister, Sloane,* who’d already been with me three months. Upon doctor’s recommendation the girls were separated. The previous foster home reported Sloane to be very aggressive towards her sister that’s why she ended up with me.

Two days after arriving, Elise smiled at me! I’m so thrilled to have it on film. From there she steadily improved emotionally. Her body

began to relax when I carried her. She didn’t recoil when the other children tried to touch her.

I entered at the tail end of a battery of tests. Elise spent the first 6mths of her life in foster care. There was no notice of a misshapen skull until she returned to care a second time after being with her birth family for a while. The final verdict was that Elise had a rare genetic mutation that had caused a chromosome in her frontal lobe to fuse – at least I think that’s what the doctor said. The bottom line was it wasn’t caused by anything or anyone outside of her own make up. The specialist strongly recommended surgery to reshape her 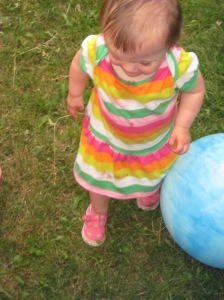 skull. One of the biggest concerns being that her eyes did not line up. This would cause issues in Elise’s ability to walk and develop which likely accounted for the fact that she was significantly delayed in every area.

The social worker discussed the suggested surgery with her supervisor and the doctor on staff at the Children’s Aid medical clinic. They decided against it. One reason being an expected move to the US for Elise and her sister. Even when that fell through the surgery was ruled out.

As a foster mom I don’t have much say in the natural. Every night I’d put Elise to bed listening to a cd from Bethel called Be Healed.

not impressed with the park

Putting my hand on the indent in her forehead, I’d say, “Be healed. Come into alignment.” That was the extent of my prayers. But I know God put her on the heart of many intercessors. I love that He brings others alongside me to fulfill that mandate. In the challenges of everyday life as a single foster mom I don’t always have or make the time to pray at length.

Elise looked like a doll whose head had been pushed in at one side. Sometimes it was more noticeable than others. The eye specialist continued following her development. We had appointments every few months.

A speech therapist and two occupational therapists were also working with Elise. Surrounded by the three very friendly women, she’d cower in my arms. They exclaimed about how well she was doing. They’d seen no signs of attachment with the previous foster mother. Our appointments continued this way for several months. 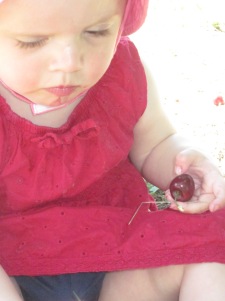 On top of everything else, Elise wouldn’t eat. She came to me with an extensive file. It was day three before I read through it all and discovered she was supposed to be on formula still. The social worker hadn’t mentioned that. I ran out to get bottles and formula. Despite my best efforts offering everything from baby food to French fries, Elise would not eat. She only wanted a bottle. That changed when we went cherry picking. She crawled along the ground eating discarded fruit (of course I was very careful she didn’t choke on the stones). Up until that point I’d always tried to put the food in her mouth.  With her motor skills and sight not being what they should, I didn’t think she could do it on her own. After seeing her with the cherries I began putting food in front of her and walking away. She quickly devoured it. Six weeks after she arrived, the doctor took Elise off formula. She’d put on an appropriate amount of weight and was out of danger.

Elise’s vocabulary began to grow. She became mildly engaging at home. The depression was leaving her. Most days she happily sang to herself – a beautiful change from the child who came to me nearly mute. I didn’t have a specific approach except the belief that things can change. Despite her initial and sometimes on-going rejection of me I showered her with love and affection. I’d kiss her cheeks and hold her tight, letting go when she pushed me away but always trying again later. Consistency and determination were my only real tools. At times it was frustrating and sad but I understood why she didn’t trust or embrace me. I was the fourth mother she’d had in twenty-one months. It took time and wasn’t easy. But Elise began to blossom.

The most amazing thing happened. As her heart healed so did her body. The deformity of her head became less noticeable. Her hair began to grow (previously it wasn’t growing in along the affected side). The birthmark on her lip that looked like a cold sore began to fade. She could walk then run and jump. Her words turned into sentences.

In June 2012 when the speech and occupational therapists tested her Elise was functioning far above average in every area! The very fact that they got her out of my arms to participate in the testing was victory enough to me. Testing far above average was more than I’d dared hope for. I work with special needs children. Labeled as “delayed” they never do catch up. Elise not only caught up, she surpassed the expectations for her age.

All I’d prayed for was her head to heal so she could see properly.

August 2012 we visited the eye specialist. The assistant who does most of the testing exclaimed, “Her eyes are almost perfectly aligned! This could only have 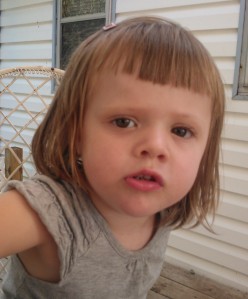 happened with prayer!” A torrent of words poured out about how concerned she’d been since Elise was not getting surgery which was the only way to correct the issue concerning her eyes. “But obviously you’ve been praying,” the woman said with relief. I bet she was too.

Now, nearly 4yrs old, Elise is full of joy. After we signed the initial adoption papers in September 2012, she made up a song to commemorate the occasion. “It’s adoption day! It’s our day! Adoption day!” she sang for days. I often look back at the pictures of her since she came to me (hopefully you’ve enjoyed it too). I love celebrating with the Lord everything He’s done for my amazing daughter – the biggest miracle being that she’s mine!

6 thoughts on “Only Prayer”